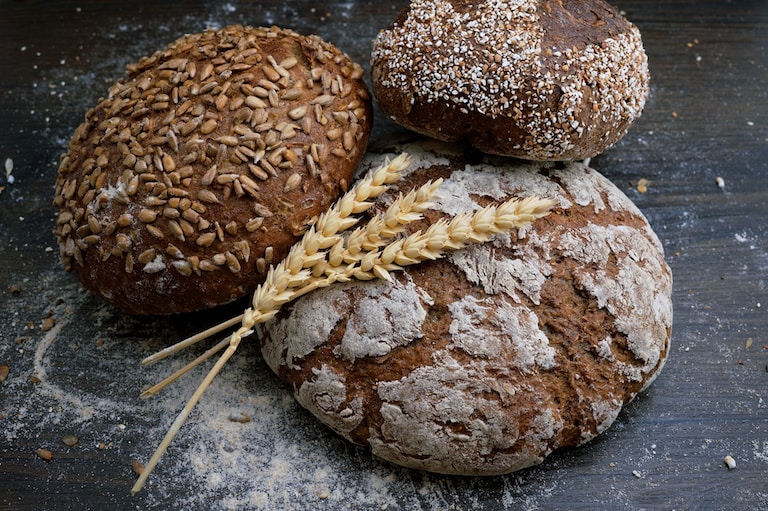 Last weekend I was really looking forward to celebrating the end of austere January and welcoming in February with a bacon sandwich. Not just any old sandwich, it had to have the best bacon (I love unsmoked streaky; Duchy Originals and Denhay are both good, but try your local butcher’s own bacon if you can), and the bread had to be just right, especially since I really don’t eat bread that often. The main reason for this is that I try to largely follow a Paleolithic diet, or whole food diet. For those of you who haven’t heard of this popular food movement, the premise is that we should all aim to return to a more primitive, less complicated diet, containing ingredients that we recognise, and choosing the sort of foods our ancestors ate. Hence, a Paleo diet is is high in protein, good fats and (non-starchy) carbohydrates.Bread is forbidden in the Paleo diet (well, bread as we know it – there are many Paleo recipes for wheat-free Ezekiel, or sprouting breads but these are not made with wheat flour, and do not resemble bread as such), as are all white, processed foods such as pasta and rice, as well as potatoes, as these were not part of the diet of our hunter-gatherer forebears.

Paleo followers believe (and there is much evidence to support this) that food processing has led to the obesity epidemic in the West. Starchy carbohydrates like bread have a high glycaemic index (GI) which means they release their intrinsic sugar quickly, causing blood sugar levels to spike. This in turn creates a rapid rise in the hormone insulin which is produced to escort sugar out of the bloodstream to where it is needed for energy (the liver and muscles) or for storage as fat if taken in excess. Eating large quantities of high GI foods can lead to an increased production of insulin, blood sugar balancing issues (think mood swings, food cravings, headaches, etc.), central weight gain and ultimately insulin malfunction (Insulin Resistance or Pre-Diabetes and Diabetes).

Paleo Diet aside, the other reason I tend to avoid bread is that I find British bread on the whole pretty unpalatable.  Supermarket loaves for example – the texture is all wrong – there is no substance or structure to the bread. When I go to France and eat a baguette, I do not have any of the uncomfortable symptoms that I suffer with British supermarket bread such as bloating or abdominal discomfort. In France, bread is bought daily from the local boulangerie where it is made by artisinal bread makers who take pride in their industry. The bread has a satisfying texture and goes stale the following day. It is not pumped full of unrecognisable ingredients designed to increase yield and extend shelf life.

Here in the UK, most of us buy our bread from the the supermarket, and of these supermarket breads, most are in fact produced in the same factories in the same way. Most contain twelve or more ingredients, often including sugar or caramel. In fact, only three ingredients are actually needed to produce a delicious bread; flour, yeast and water. The problem with these breads is the production; instead of allowing dough to prove and rest so that it properly ferments, a process called the Chorleywood Bread Process (CBP), established in the 1960s to increase yield, is used.  This process avoids lengthy fermentation and instead pumps air and water into the dough. As a consequence twice the amount of yeast is required. Chemicals are required to allow the gas to enter the mix and fat is added to give structure to the bread. If you are interested in reading more about this topic, Felicity Lawrence’s fascinating book Not On the Label: What Really Goes into the Food on Your Plate is really worth a read.

It can be a bit of a minefield deciding which is the best bread to buy, so I have included a list of the various qualities of different bread types to help you make your choice.

Personally, I generally choose one of two breads to feed my family, and all my children prefer them toasted. They love a good baguette for sandwiches, but I find it quite hard to buy a decent one unless I go to a specialist bread shop or to the Farmer’s Market. To find your own local producer of decent bread, try the Real Bread Campaign; you can put in your postcode and find your nearest supplier of proper bread. I can, however, buy Crosta Mollica‘s Pane Pugliese Italian toasting bread in my local supermarket, and we all love it. The children have it once or twice a week for breakfast with marmite or peanut butter, and it was my bread of choice for my celebratory end of January bacon sandwich. The bread is a beautiful golden colour, has a lovely chewy crust and a great texture when toasted. Better still, it has only four ingredients; flour, water, yeast and salt; and has a very short shelf life.

The other bread I love, unfortunately also not British, is Poilâne. It doesn’t have quite the yielding texture of the Pane Pugliese, but is chewy with a hard crust, and  is delicious toasted and untoasted, and makes a great sandwich. Like the Italian bread, it is only has four ingredients (the same ones) and maybe due to its longer fermentation, it has no adverse effect on my digestion.

For my perfect sandwich, toast two slices of your choice of bread, spread liberally with good quality salted British butter, preferably organic (try Yeo Valley). Top with three or four rashers of crisp, grilled bacon. Add Brown Sauce (for me, it has to be HP Sauce), if it’s a breakfast sandwich.

If it’s a Sunday night supper, I will top with sliced avocado, or, if I am feeling virtuous, or simply can’t get hold of my favourite bread (the pesky kids have eaten it all, usually!), then I will make a Nom Nom Paleo Bacon & Guacamole Sammies (or bacon and avocado sandwich, in English). That is simply bacon grilled until crisp, used as the bread around a filling of mashed avocado. Delicious, Paleo heaven.