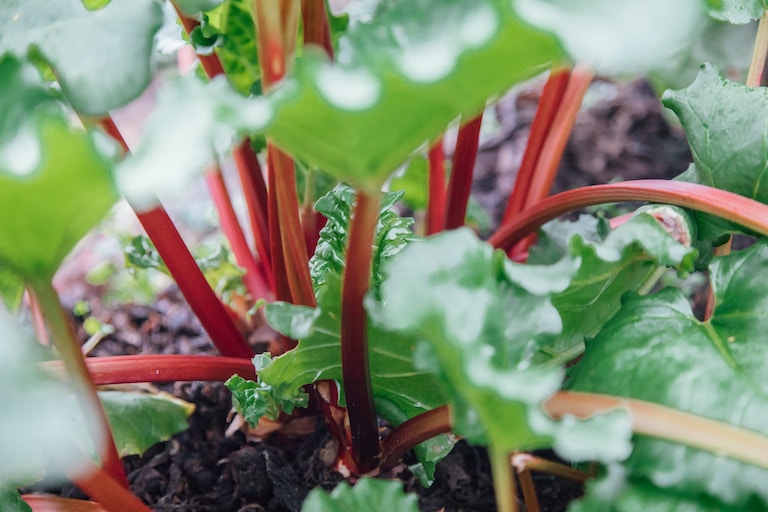 I always think the arrival of British forced rhubarb signifies that Spring is not far off. It’s cheering colour is such a contrast to other seasonal fare and looks so pretty that I can’t resist it. We have consequently been eating a lot of it in the Harris household over the last week or two.

Rhubarb has been known in the UK for 500 years or more. Its root originally came from Siberia, and it was imported for medicinal purposes (it has astringent, laxative, purgative and anti-parasitic properties, as well as aiding bile flow). Mrs Beeton mentions it as relatively little-known plant, and the first recipes using it date from the late 18th century.

Here in the UK, the best forced rhubarb is grown in Yorkshire. Forced rhubarb, or early-season rhubarb, is grown under cover, at a constant (high) temperature. Natural light spoils the appearance of its leaves, so it is harvested by hand by candlelight.

Early-season rhubarb is acidic in its raw state, and requires cooking and the addition of sugar to make it palatable. Its leaves are toxic due to the high oxalic acid content, so discard before preparing your rhubarb.  It is rich in potassium, as well as calcium and vitamin C.

Rhubarb is generally used as a fruit, although it is by definition a vegetable related to sorrel and buckwheat family. It is often used for puddings and sweet foods, and makes a popular crumble filling. It also makes a fantastic syrup to use for martinis.

To make the syrup, we used Hugh Fearnley-Whittingstall’s recipe in The River Cottage Year, doubling up on the quantities, as it can last for several weeks in a sealed jar in the fridge.

For the martini, use 1 part rhubarb to 4 parts vodka.  We used Chase Vodka, which is British.  Serve with 2 inch stick of raw rhubarb to garnish.  Watch out though, these are lethal!

We kept the rhubarb and blood orange pulp post-straining, and this compote can be used to tart up a breakfast porridge, or served as an accompaniment to oily fish (we like it with grilled mackerel).

This tart was amazing. The blowtorch creates a Crème brûlée texture to the top of the tart that works really well with the rhubarb and the blood orange. If anything, the tart filling was perhaps a little too wobbly – it may need the addition of one more egg yolk, but in all honesty, I liked the texture and for me felt it worked well with the brûléed top. And it went fantastically with a glass of Sauternes.